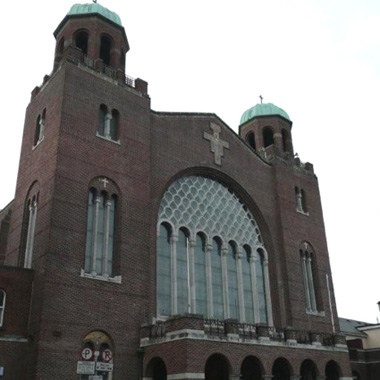 Water was wearing away the mortar bond between the outer brickwork and the inner concrete wall over the front gable. As a result the load from the brickwork was starting to bear down on the corbelled brick arch over the main window. Cast concrete piers supporting the corbel projecting from the stone window had been suggested to support the weight.

In the front towers there was extensive internal cracking of the mass concrete walls, some cracks up to 10mm in width. An internal universal beam steel frame with welded bolts chemically anchored to the walls has been initially suggested to arrest the cracking.

A scheme was devised by Helifix engineers to form the brick façade into a panel and tie it back to the main structure. HeliBars were bonded into the mortar beds of the brickwork spanning the gable window.

Grouted CemTies were installed through the brickwork to secure the brick 'panel' to the supporting structure and through the brick corbel to provide additional strength. Internal cracks were stitched with grouted HeliBars at 450mm centres across the cracks.

All works were re-pointed with historic mortar match, cracks filled and bricks repaired to match the originals, leaving virtually no visual trace of the works undertaken, which were quicker, less disruptive and far less expensive than the original proposed solutions.