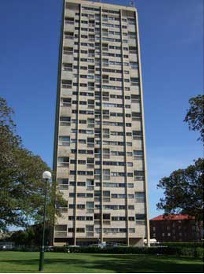 Architect Harry Seidler considered Blues Point Tower to be one of his best buildings (1), and his many admirers would no doubt agree. But following its completion in 1962, Blues Point Tower has attracted more than just devotees. Salt, moisture and exposure to Sydney’s harbour environment have all exacted a toll on the building’s façade.

The building comprises a concrete frame structure and cavity brick infill panels. Weathering and building movement have contributed to the development of a number of problems requiring remediation including masonry cracking and corrosion of the original wall tie system.

In 2000, two Helifix repair schemes were called upon to help with works conducted to repair the building’s southern elevation. DryFix ties were used to reconnect the external and internal brickwork leaves of each infill panel while RetroTies were used to connect the edges of each panel to the surrounding concrete superstructure. To install the DryFix, small undersize holes were first drilled through the external leaf and into the internal leaf. DryFix ties were then driven in to finish just below the surface of the near leaf using a Power Driver Attachment.

To install the RetroTies, pilot holes were drilled through the brick and into the concrete behind before the holes in the near leaf were enlarged to 10mm. RetroTies, 8mm diameter, were then power driven into the pilot hole in the concrete to create a mechanical connection. Finally, resin was injected into the clearance hole to chemically bond the exposed end of the tie to the near leaf masonry. RetroTies were used in preference to DryFix in this instance to accommodate differences in the densities and structural performance of the materials involved.