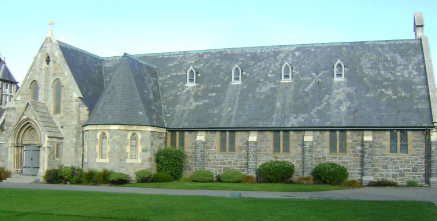 This attractive chapel, constructed from volcanic stone and clad internally with soft limestone (Oamaru stone) panels, became the interim home for the Anglican community in Christchurch following the 22 February 2011 earthquake and subsequent partial collapse of the Cathedral.

To help ready the chapel for the upcoming Easter services, a method had to be quickly devised and implemented to improve the strength of connection between the cladding and the volcanic stone. Stabilisation of the vestibule wall was also required.

The RetroTie system was chosen by the project engineers to perform the first task. Small pilot holes were first drilled through the cladding and into the stone. The holes in the limestone were then expanded and cleaned. Finally, RetroTies were power-driven into the pilot holes in the external stone wall before resin was injected to bond their exposed tails to the limestone cladding. Patching using a lime-based mortar, specially prepared on site by the project stonemasons, produced a near invisible fix.

Long-series ResiTies were then used to pin the rubble-filled vestibule walls. Blind holes were first drilled through the external stonework and deep into the back-up materials. Resin was then pumped into the holes. Helical stainless steel ResiTies were then wound into the resin-filled holes.