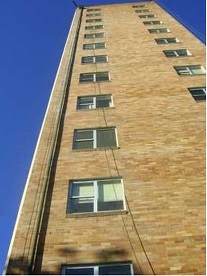 Political movements are not the only source of life in Kirribilli. Building movement in some of Sydney’s largest and most prestigious apartment blocks also make a contribution.

On-going movement and the gradual deterioration of some component elements in this apartment block resulted in the need for some substantial refurbishment and an opportunity to revamp some of its key architectural features. Contractors were called in to waterproof the balconies and to refurbish them with glass balustrades so that occupants of each apartment might make the most of their spectacular harbour view. Part of this project involved using the DryFix system to stabilise the masonry around the edges of each balcony. Additional Helifix ties were then used to secure sections of the building’s parapet and help control movement in its northern elevation.The project engineers specified Helifix Installation Detail BMJ01 to secure a movement joint that was to be cut into the northern wall. A movement joint had been cut into the lower portion of this wall some time earlier, but it was decided that the opportunity should be taken to extend the joint to run to the full height of the wall. In accordance with detail BMJ01, after cutting the joint the contractors installed additional DryFix wall ties up either side of the cut at 300mm centres, installed sleeved HeliBar sections across the joint to allow for horizontal movement, and then sealed the joint by injecting a suitable flexible mastic.