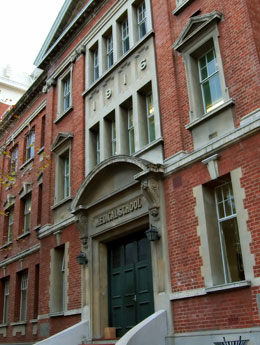 Seismic strengthening of the Scott Building at the University of Otago recently commenced following a detailed seismic assessment.As part of a comprehensive strengthening program scheduled to run over at least the next decade, DryFix were used to tie the two whythes of the building’s second floor unreinforced masonry (URM) wall.Completed in 1918, the Scott Building was identified by the University as a URM building of considerable material and cultural value. Situated near the entrance to the emergency department of the Dunedin Hospital, it was also identified as a building in need of a seismic retrofit since failure of the façade could severely disrupt the smooth functioning of the hospital.
Fibre-reinforced polymer sheeting was used to clad the internal brick wall. New structural diaphragms were added at floor and ceiling levels.

The DryFix system was used to strengthen connection between the internal and external wythes. Undersized pilot holes were drilled at regular intervals through the near wythe and into the remote wythe. Stainless steel, 8mm diameter DryFix pins were then driven into position on the hammer action of a drill to provide a fully mechanical connection.

The ties were installed from the inside of the building, leaving the façade untouched and an invisible structural solution.