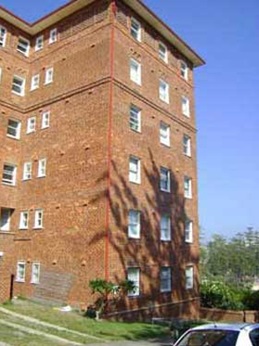 This building occupies a commanding position at the southern end of Manly Beach, Sydney, NSW. For much of the last two years, however, its spectacular outlook has been impeded by scaffolding and contractors working to carry out much needed repairs to its intricate brickwork façade. The issues that most needed to be addressed included the deterioration and failure of wall ties and mortar joints. Both problems undoubtedly resulted from decades of exposure to Manly’s seaside conditions.The DryFix system was called upon to retie the majority of the buildings cavity brickwork. To this end, several thousand 8mm diameter DryFix ties were driven into small 5mm diameter pilot holes that had first been drilled through the face brickwork and into the inner brickwork leaf. Larger 10mm diameter DryFix ties were driven into 6mm diameter pilot holes in one section of the building where the cavity width measured around 200mm.

The ResiTie, RetroTie and StarTie systems were used in several other areas of the building where the deterioration of the brickwork was such that some rebuilding and some resin-based tying of the façade was required.