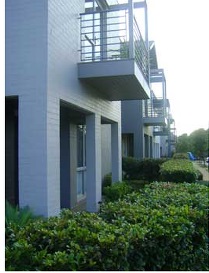 The construction of the Olympic Village for the Sydney 2000 Olympic Games was the largest project of its kind at the time. It involved the construction of an entirely new suburb, complete with its own postcode, and was designed to house more than 15,000 people during the games, a further 7,000 people during the Paralympics, and a whole new population of permanent residents just a few weeks after that.

The project logistics were impressive, but as if this was not enough the project engineers and developers, it also had to contend with the site’s unique topography and geology. The land upon which the village was to be built was once deemed part of the Parramatta River Estuary but was considered at the time of construction more wasteland than wetland. This conjecture was confirmed as site surveys revealed that the many thousands of buildings to be built would have to be set into foundation soils comprised of a mix of river sediment and urban and industrial infill. The buildings themselves had in the meantime been designed to meet a range of environmentally sustainable objectives. Most buildings received solar panelling and a range of passive energy saving features. Architecturally, the buildings had been designed to project a clean and vibrant atmosphere. Building openings were designed according to a uniform flat arch design, with additional square arched pergolas and architectural features added to individualise many of the buildings.

For the project engineers, the task of combining extensive square arch design with inconsistent foundation soils brought about a particular challenge: how to cost-effectively and reliably reinforce square masonry arches to resist cracking from likely foundation movement. Stainless steel HeliBar was ultimately chosen as the solution to the problem and, over the course of the multi-year project, several thousand 1200mm long HeliBars were installed above the corners of openings in the façades of many of the new dwellings.

The installation procedure was straightforward, and added little to the overall construction time. In accordance with Helifix Installation Detail BNB04, single lengths of HeliBar were bedded into the first brick course running above each of the selected openings, with each installed bar positioned such that half its length projected above the opening and half into the supporting pier. A second length of HeliBar was then similarly bedded into a second brick course situated higher up in the wall. A curb side survey of dwellings, close to ten years after the completion of the project, revealed that masonry cracking above openings is not an issue where HeliBars were installed.